What is Regenerative Hair Restoration?

Regenerative Hair Restoration procedures use various regenerative devices and biologics to release specific growth factors which have been shown to stimulate, increase, and improve hair growth rate and size, improve the rate of anagen, the active growth phase of hair follicle growth, and slow down apoptosis.

If a regenerative hair restoration program is begun early enough, it is possible to dramatically slow down and even reverse hair loss for both men and women. The best results are seen on patients who have noticed thinning hair or balding within the past 7 years, however, almost all patients see some form of improvement in either hair length or size.

What does Regenerative Hair Restoration treat?

The vast majority of patients treated are experiencing hereditary hair loss – also known as male or female pattern hair loss – which accounts for 98% of hair loss. The symptoms may come on quickly with patients noticing thinning hair all of a sudden one morning or they may gradually appear over time. 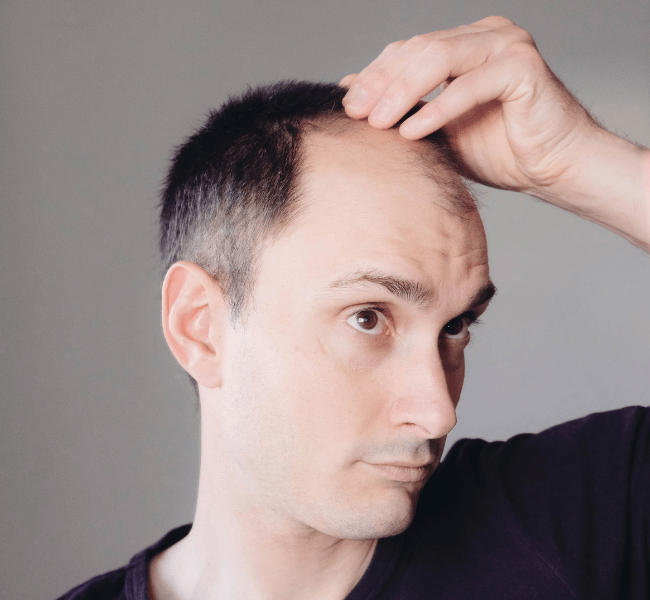 Male Pattern Hair Loss is characterized by thinning hair beginning at the temples and the crown of the head. Over time, the hair at the temples slowly recedes, leaving a central patch of hair at the front of the hairline and a growing bald spot at the crown. As the hair loss in these areas widens, the baldness at the front and crown meet to form one large bald spot. Eventually, all that will remain is a border of hair around the side and back of the head. Male pattern hair loss is a concern for many men because as the hairline recedes, the face takes on a more aged appearance, which can lead to a significant loss in confidence.

Multiple studies have shown that Dihydrotestosterone (DHT), which is a breakdown product of the male hormone Testosterone, is the trigger that causes the progressive miniaturization of hair follicles. For those individuals genetically susceptible to male pattern hair loss, DHT works to progressively miniaturize follicles, who then grow shorter, thinner, less pigmented until they finally die.

An estimated 20 million American women experience shedding or thinning hair as they age, although many women mistakenly think they are going through this alone.

The most common types of hair loss in women are:

How does a Regenerative Hair Restoration procedure work?

When it comes to your scalp, PRP is a natural way to stimulate and encourage new hair growth for both men and women!  PRP contains a wide variety of growth factors that have been shown by multiple studies to rejuvenate the damaged hair follicle, reawaken it, and bring it back to life.

Some patients choose to enhance their procedure with an Amnion/Extra-cellular Matrix product that contains many times the growth factors of PRP alone.

The procedure is relatively painless and can be done in approximately 30-45 minutes. The PRP and/or Amnion will be injected into the scalp at regular intervals.

What are some of the benefits of a Regenerative Hair Restoration procedure?

Both PRP Therapy and Amnion/ECM may help in multiple ways:

How many treatments will I need?

The number of treatments is always determined by the severity of your hair loss. After the initial consultation, a patient care plan will be created that will help meet the needs.

To achieve maximum benefit and ensure long-lasting results, three treatments are typically required. The initial treatment will be the most comprehensive and set the stage for your body to begin the regenerative healing process. This is followed in 30 days by a follow-up procedure which serves to enhance the body’s Regenerative cascade, providing incrementally beneficial results. This is typically followed by another procedure in another 30 days.

How do I learn more?

Schedule a call to activate an appointment with one of our Providers at Willowbend Health and Wellness or call 469-361-4000.